How Did You Meet?

We often get asked “How did you meet?”. Was it in Mexico? Was it during a trip? I’ve written a resume of our story in ‘About Us’, but for those who like the longer version, here it is! It is still one of my favourite stories.

On a beautiful day in September, I planned on spending a lovely day with my friend and colleague Anniek. At that moment, I had a full time contract at a Dutch company, with an office in Lyon, France. She had a summer contract, so she was wrapping up her last couple of days in the second Metropole of France, before she would head back to the Netherlands. This asked for a good day of quality time.

We started out having lunch at an English pub, called the Wallace. The sun was shining, we sat outside and enjoyed our meals. I went for a salad with grilled goat cheese, as I was a vegetarian at the time. We also ordered a bottle of wine, so the food would go down a bit easier. And because we like a good glass of wine. We had such a good, deep conversation, so we sat there for a pretty while.

After a long moment, we decided we didn’t want the day to end, yet. We wanted to go shopping, and went to one of the commercial centres in Lyon – Confluence.

Here you can go shopping, do groceries, have a meal, from fastfood to fancy, or just enjoy a drink. After a couple of stores, we couldn’t find anything we liked. No problem, the mall had plenty more to do. As the weather was still great, we sat down on a terrace for a drink. Out of nowhere two English guys – from the English department of our office – showed up and decided to keep us company. Apparently on Thursdays a couple of the restaurant/bars have happy hour and offer two cocktails for the price of one.

Their joy – probably because this wasn’t the first cocktail they were going to consume – motivated us to order a cocktail as well. A mojito and a fun talk later, the guys had to go on for the next happy hour. We also craved a change of scenery and went to a Tapas restaurant. The menu didn’t appeal to us – as most of the dishes were meat or fish, but they served a good Rioja. Which we enjoyed with the lovely view over the pond in the outside world.

We had another great conversation – and now both started craving food. As a vegetarian this wasn’t always the easiest part in France. You have to think well where you want to go – and what you want to eat. In standard restaurants, most of the times I had to give in on what I actually like. It could even happen they wouldn’t serve anything else than green salad with tomato. Oh, the joy of being a vegetarian.

Luckily a couple of doors further, there was this Mexican restaurant. Where you could order a burrito, tacos or quesadilla and most important: choose your own filling! We doubted a little bit, as Subway was next door. Nonetheless, it was an easy choice. Burritos always win.

Now we’re getting to the best part of the story 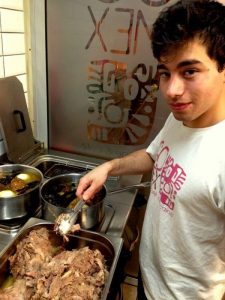 Anniek and I stepped into the Gomex, where there weren’t any customers at that moment. The staff was working in the kitchen – and later I was told that both didn’t really feel like serving a customer as they were busy cooking. Don’t get me wrong, they do love customers, but cooking is also an important part of the job. Luis lost and had to get out of the kitchen to take our orders.

I noticed he had a strong accent, when he spoke French to us. Motivated, because I missed speaking Spanish, and because of the wine, I asked him where he was from. I know, it’s a Mexican restaurant. But he could also have been from another country. When he responded he was from Mexico, I switched to Spanish. That’s when we clicked. 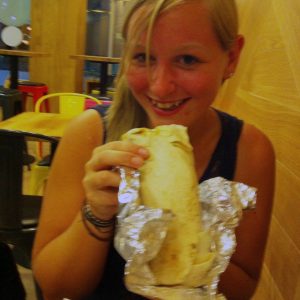 He got curious why I could speak Spanish – and I babbled enthusiastically with him about my story in between ordering my vegetarian burrito. Anniek was totally lost as she doesn’t understand Spanish. When both dishes were ready, we paid and picked a table.

Anniek and I went back to our conversations and enjoyed our meals, when Luis suddenly came back to the counter. He called my name and asked for my phone number, so that we could hang out sometimes and connect. I wrote it on a piece of paper he had ready for the occasion. He didn’t give me his number though.

A couple of moments later, we had finished our meals and left. Giggling about the encounter. Wondering when and if I would ever hear from him again.

Okay, it isn’t a big surprise. You already know where this story led to, but yes. Although it took almost a week until I received a text message.

Surprised he didn’t forget about me and wondering if he was playing the good old ‘hard to get’, we started texting back and forth. Until he asked me if I wanted to go out with him someday.

I told him I did want to, but that we would have to wait. As I had to work 7 days in a row, all shifts from 15:30 until 23:00. I was kind of dating someone back then, and that person was convinced evening shifts made it impossible to meet up. So I didn’t expect anything of that week.

Luis was a bit less patient though. He proposed to meet for lunch, a couple of days later. Sure! A woman’s gotta eat anyway.

On the 8th of September we had our first date. He made sure he arrived early, I arrived just in time – as always. We were kind of awkward in the beginning. We did not know if we should speak French, Spanish or English. Neither did we know where to go. As I mentioned before, my options were limited and for a date you want to be able to sit at a nice place as well. We decided to walk through Vieux Lyon and see where we would end up, but instead we ended up talking along the way and when we arrived at the end, we still haven’t sat down. 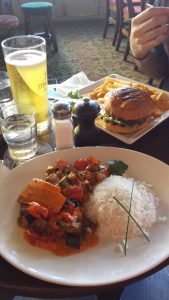 Across the street from Wallace, where I went with Anniek, there is another pub. The Elephant and Castle. I had never tried that one for lunch – and it always caught my attention. After a quick look at the menu, we decided to give it a go. They had a vegetarian lunch option, so that was great. I had a curry with vegetables, Luis went for a big hamburger.
We both got a pint of beer against the nerves, this definitely helped us to loosen up a bit. Luis confessed he almost lost my number! He had left it in the pocket of his pants, which he almost put in the laundry.
Time flew by, we ordered a banana bread beer together to taste – and then we had to leave again. Of course we didn’t take pictures together that day – but I did take this one picture of our meal.

On the same day, my parents would arrive from Dijon to Lyon. They were on holidays and came to visit me for a couple of days. But they arrived shortly after I would have to start my work shift – so they knew we wouldn’t get to hang out a lot that day. I managed to procastinate my departure until the last moment, but then I really had to go and see my parents. I didn’t tell them about my date back then. Later when they asked me ‘how did you meet’, I had to tell them it was on the same day as I saw them and drank a can of coke with them on the terrace of their hotel.

Back to the date

I always received ‘ticket restaurant’ from the office, so I decided to pay for lunch with my ticket restaurant. Which didn’t please Luis, as he wanted to be a gentleman and pay for my lunch. Haha! He bought me a baguette for my dinner break at work instead, and promised me to cook me dinner some day.

He ended up cooking me lots of dinners – and still does so.

And now we live happily ever after.

Postpartum Depression I have to tell you something