Our first week as parents

We want to share with you how our first week as parents went. It was a very special week, exhausting and beautiful at the same time. Labor took us 30 hours, from the first signs until the end. You can probably imagine we haven’t slept a lot since our last night before that.

In the Netherlands newly parents don’t stay in the hospital for more than a few hours, if everything went well. I had an epidural, so they let us stay a few hours longer, but in the evening we were dismissed. My parents picked us up and upon arrival at home my uncle, grandmother and brother were there as well.

Ready to meet their new family member, cheer with (pink) champagne and eat a biscuit with white/pink sprinkles. That biscuit is a typical Dutch thing to do. We celebrate newborn babies with biscuit and anise sprinkles in the color of the sexe of the baby.

Even though it probably sounds harsh for many people that we get sent home that fast, but we’re not left on our own. The healthcare system here includes a nurse that comes to help parents out with their newborns, usually between 8 or 10 days. Depending on how well you can manage to take care of things yourself.

Before giving birth, I thought it was a nice luxury. Now I have seen the huge value of it.

She helped us out with a lot of things. Almost everything is new about living with a newborn and she could answer all the questions and worries, explain reasonings and help with the development of tactics. She also takes care of baby and mommy, medically spoken.

Our nurse came almost an hour after we’ve arrived at home. First we took a little moment to get to know each other better, since we would spend a lot of time together.

From know on I’ll refer to her as O.

Our family left in time, to leave us alone to get some rest and take care of Sophia. O. weighed the baby and did a few check ups. She also got us started with breastfeeding.

At first our idea was to place the crib in our bedroom, so that we don’t have to move a lot when she wakes up at night. O. actually had a better idea, she told us we could also use the crib of the stroller, so we didn’t have to move around all the furniture.

So now we sleep with the part of a stroller, placed on top of a camping table next to our bed. Who needs expensive baby furniture when you have imagination, right?

Late at night she decided we were good to go for our first night alone with Sophia. It was very interesting to notice how your sleeping pattern changes. We woke up to every soft sound, but also when it was completely silent, to check if she was still breathing.

Probably very recognizable for everyone who has had babies :-). Until now we both have had a few panic attacks during the night, when we thought Sophia was in between us and we couldn’t find her.

During her first evening, Sophia had a little problem. She threw up a few times and seemed nauseous, maybe from labor, maybe from not being used to the milk. She also got cramps and started crying very loud, which scared us a bit.

Sophia is an easy and quiet baby, who doesn’t cry much. Only when she seems to be in pain. She is also a very happy baby. So when she looks unsettled, we don’t really know what to do.

Imagine two newborn parents, insanely tired, standing in the baby room, not knowing what to do. I have to admit I broke down at that point and started crying as well. Fortunately after a while, she seemed to calm down and she went back to sleep.

We survived the night!

Saturday O. arrived at 9 in the morning, curious how our first night went. I tried sitting up a lot, but noticed how it costed a lot of energy. Fortunately O. helped us with many things and encouraged me to take some rest, while we still could. She assured us we should take our benefit of her presence, now that she could also look after Sophia.

The first two days I was still in a lot of pain and got dizzy after a few hours of being awake. Using the toilet was painful, so I got recommended to use the shower. I tried taking it as easy as I could.

What I did have to worry about – and which nobody else could do in my place – was breastfeeding. The first few days were very tough. I had to practice and get used to the positions, the way Sophia had to grab on and to a certain schedule. My skin had to get used to the little creature sucking for life. It hurt a lot. Something that again, brought me to tears.

Oh yes, the transition of being able to be irresponsible to being a mommy is rough.

All of a sudden you can’t just say ‘this doesn’t feel nice, so I won’t do it anymore’. It has consequences, that can go far.

It would be way more expensive and we wouldn’t save ourselves from much hassle, since Sophia would have to get fed many times a day either way. Besides, breast milk is the healthiest for the baby.

O. told me how it would become even more painful in a few days. Apparently around day 5, the body starts to produce more milk – which causes them to explode. Okay, not really, but almost! It hurt indeed – and it was even harder to make sure Sophia would grab on in the correct way.

It’s not all suffering though :-). As soon as you look at that face of a little angel, it’s all worth it. Also, after day five everything starts to adapt itself and breastfeeding becomes easier.

I’m actually grateful things seems to be going this well. The production got activated and Sophia clearly has enough to grow. Oh boy, does she grow! O. weighed her every day. I’ll share babies weight with you.

Note that newborns getting breastfed in the first days drop weight, they are allowed to lose up to 10%, before taking action. Also they get two weeks to gain back until birthweight.

O. left us satisfied and with confidence that Sophia was growing very good. During the next days my milk flow seemed to have become so good, that the little stomach started showing problems with digestion. Concerned about the signs of reflux, we contacted the midwife.

On day 10 (not so little) Sophia already weighs 3420 grams! At least we don’t have to worry if she gets enough nutrition. The diapers also find a good use, as you can imagine.

We can definitely say our first week as parents has been challenging. Sophia’s first time for everything. Our first time for many things with a baby – I had never changed a diaper before, for example.

Each day things seem to be going easier – until we bump upon a new challenge. Which we will face with lots of love. Because oh boy, we do love her so much.

It’s incredible how such a little creature can ask for so much attention, while at the same time she is not really asking for anything, but it’s just you wanting to act upon her little creature signals.

It’s incredible how we managed to create such a perfect little human being.

She is incredibly beautiful. Our daughter, Sophia Leona. 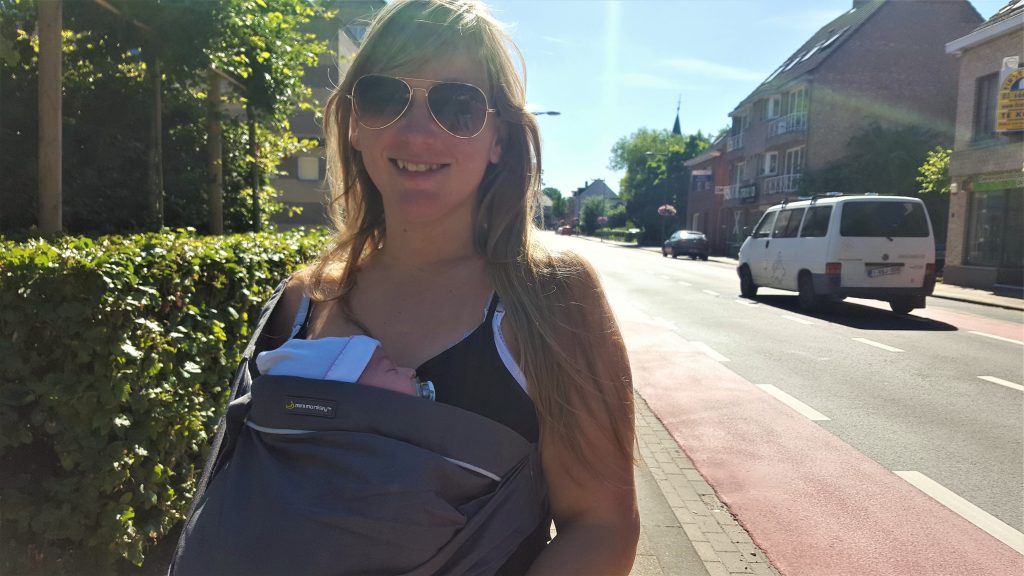