We DID IT! We went from having full time jobs abroad, to total freedom. Then to lots of stress over the visa bureaucracy. To now finally being settled. Exactly what we weren’t looking for when we both quit our jobs.

As you know, we are having a daughter soon. We found out a few weeks before our flight to Mexico. Everything was arranged, I got the long term visa done. Ready to stay for however long we wanted to stay. We stuck to our plan and went. After a while we realized we felt more comfortable with the thought of giving birth in the Netherlands. Since I was already 5 months along, we didn’t have to think for long and booked my flight back home.

Little did we know we were about to have the roughest 2,5 months I hope we will have to go through during our marriage.

I found out it’s incredibly hard, better yet impossible, for a non-European to get a visa for a longer period in the Netherlands, even when you are married. The requirements were impossible for us to reach, and got us very scared Luis had to go back within 90 days.

At the same time, being separated hit us harder than expected. We had to share something as special as the growth of our first baby over video calls and text messages. We both felt miserable and struggled to come through the days. Even though we knew we needed to be careful with the visa, we decided this wasn’t what we wanted. Once again, we just booked a ticket and within 10 days we were united again. Happy to be able to be together, frightened for our lack of time.

Looking for a new place to call home

The five weeks that followed were filled with insecurity. The flu got us down for three weeks. In the meantime we had to think of our game plan. After a while, we found a possibility. We could move to Belgium, which is close anyway.

We started visiting apartments. The first house we saw caught my eye. I started picturing ourselves living there, believing strongly it would be ours. We went to visit, and both felt very happy with the place.

A week later we received an email. The owner picked someone else, sorry. I didn’t want to feel disappointed, so I told Luis I did not believe this. I didn’t care what they just wrote. It would still be ours.

Of course, with time flying by I was intelligent enough to send messages to view more apartments. A few days later there was another freakingly amazing apartment. We sent our files and waited once again for the answer.

When Luis was in the Netherlands for exactly 5 weeks, my phone rang. I was sure it would be the agency of the last apartment with news.

What happened then, left me speechless. It was actually the agency from the apartment ‘that had already picked other owners’. It was still available and could be ours, she wanted to know if we were still looking for a home. After hanging up, I teared up. I couldn’t believe this.

The ad was already removed from the website and almost a week after the disappointing message, I did start to believe it wasn’t ours to be. So of course, everybody reacted with unbelief when they understood it wasn’t the last, but the first apartment I got contacted about.

They couldn’t but agree on me being right from the beginning.

In the upcoming days I started receiving more phone calls and mails from agencies about apartments we had visited. Right when we thought the situation was kind of hopeless, many opportunities came our way.

Both of us don’t have a fulltime job on paper, even though we work online. We can’t show a legal contract or official pay checks. This definitely caused a problem, but as you can see we found our way. 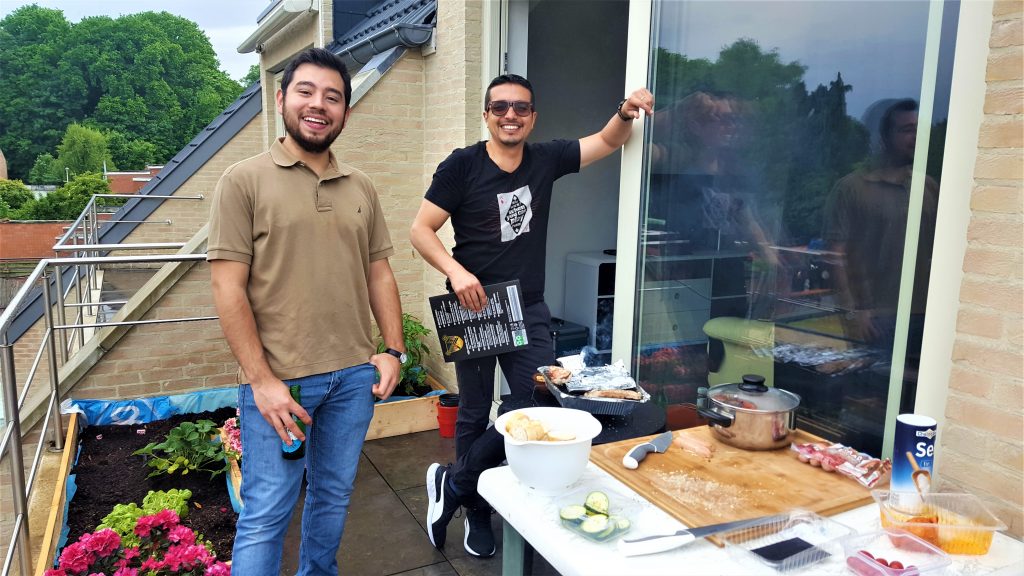 We got the keys and finally moved into our own place. All of a sudden having a home base.

Realising we did it. In such a short time, still.

Looking back, we’ve ‘only’ struggled for 2,5 months. Which is nothing, compared to other stories. I know other couples suffer from the consequences of an intercultural relationship and visa requirements, most of the times for a lot longer. It takes ages before taking a decision for their game plan.

Then, fear and insecurity might even cause them not to take any action. Their plan might fail, and then?

Funny thing is, not taking any action is even worse than failing the plan.

We were unprepared and we didn’t have the best situation to rent an apartment. With the pregnancy on top of that, it was a frightening race against the clock.

And still, we managed it in 2,5 months. Incredible! I hope we can inspire others with our story to go for it.

Nobody deserves to be so far apart from their loved ones, while really desiring to be together. There will be a way, somehow.

Believe and it will happen.

Not only did we find an apartment, now we could even pick one.

Force your desire to become reality.

How to travel on a budget Our first week as parents